"Personal Post"
Rhabdomyolysis big long name.....Causes BIG problems.  I had never heard of Rhabdomyolysis, but I promise I will never forget it.  What is it?


Rhabdomyolysis is the breakdown of muscle fibers that leads to the release of muscle fiber contents (myoglobin) into the bloodstream. Myoglobin is harmful to the kidney and often causes kidney damage.  My son was effected by this disease after an extraneous work out that involved over 100 push ups.  He tore a muscle in his arm, which days later became inflamed..  The next day he woke up with sore arms.  I just thought well he worked out more than normal, he will feel better tomorrow...We the next day he could barely move his arms.  I scheduled an appointment the next day...and that morning one of his arms was swollen.  When we saw the Dr he sent us to the emergency room.  We were informed that Zachary had Rhabdomyolsis and need to be put on an IV and admitted to the hospital.  His kidneys could not process the myoglobin released by his inflamed muscles and he was in SERIOUS danger of kidney failure.  I was in shock.  Besides his arm being swollen he was completely fine....No fever, no nausea, just some muscle pain and some discomfort nothing I thought was going to be serious.  When our lab test results came back we were told that his myoglobin were so high the computer used to count levels couldn't count....That was Friday, January 20th.....Our numbers were off the charts until yesterday January 23rd.  But we still can't leave the hosptial until our numbers have returned to normal.  How crazy is that.


So here is my random 2 cents worth.......
1.  If you have a child in PE or gym or any other athethic sport make sure they WORK UP TO, or BUILD up to a good work out.   Coaches should never use extra extra physical work outs as punishment....It is a huge cause of Rhabdomyosis.   You make sure you educate your child on what is toooo much,and you let them know if they are tired or know they reached their limit they need to stop.  It is obvious that teachers and coaches can't make that judgement for you.  You back your child up on any punshment that may come..


2.  Listen when they say they are sore from a work out and take them to the DR if you notice they have any kind of stiffness or loss in range of motion.  It doesn't hurt or cost to preform a unrine test before you leave the DR to make sure that the kidneys are okay.  Even a minor emergency clinic can help.  I don't know what I would do if my Dr. Had miss diagnoseing this.  (Actually I do....I would be wrighting a blog about the senseless loss of my son, or how we are praying for a kidney transplant while on a dialysis machine)  Most of the time this diagnosis is missed and a child will never wake up, or wake up without kidney function.  CRAZY...


3.  I am a huge believer in physical fitness and activity.  I have a "hyper" child with Autism, and I have always kept him active in sports.  He is always involved in one sport or another.  He really never gets to just sit around all summer.  But everything in Moderation.  As active as my son we are not training for the Olympics.  There is no reason to push your body far beyond its limits when training.  Even if he were on a state championship team the best athletes have built up their strength OVERTIME....Not all in one day.


I wish I had been at school with him that day.....to tell that coach....UM no he will not be doing those push ups....20-25 is enough for one day...I wish I would have told him...You can stop when you have reached your limit no matter what your coach says.


I just hope I have raised awareness of this disease to you...and I don't want to scare anyone...but I can't believe how common it is and how I have never heard of it....


We hope to leave the hospital soon until then I can I say I feel much better venting.
Here is a news story your might find interesting.
http://www.blackheartgoldpants.com/2012/1/1/2673785/happy-new-year-from-bhgp

On a lighter note.  Some volunteers made this small pillow for my son.  It is perfect for a teen.  If you ever are looking for a great project to GIVE BACK check your local hospital and see if you could do something like this....It really made his day. 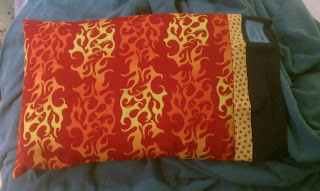 Email ThisBlogThis!Share to TwitterShare to FacebookShare to Pinterest
Labels: my son diagnosed with rhabdomyolysis